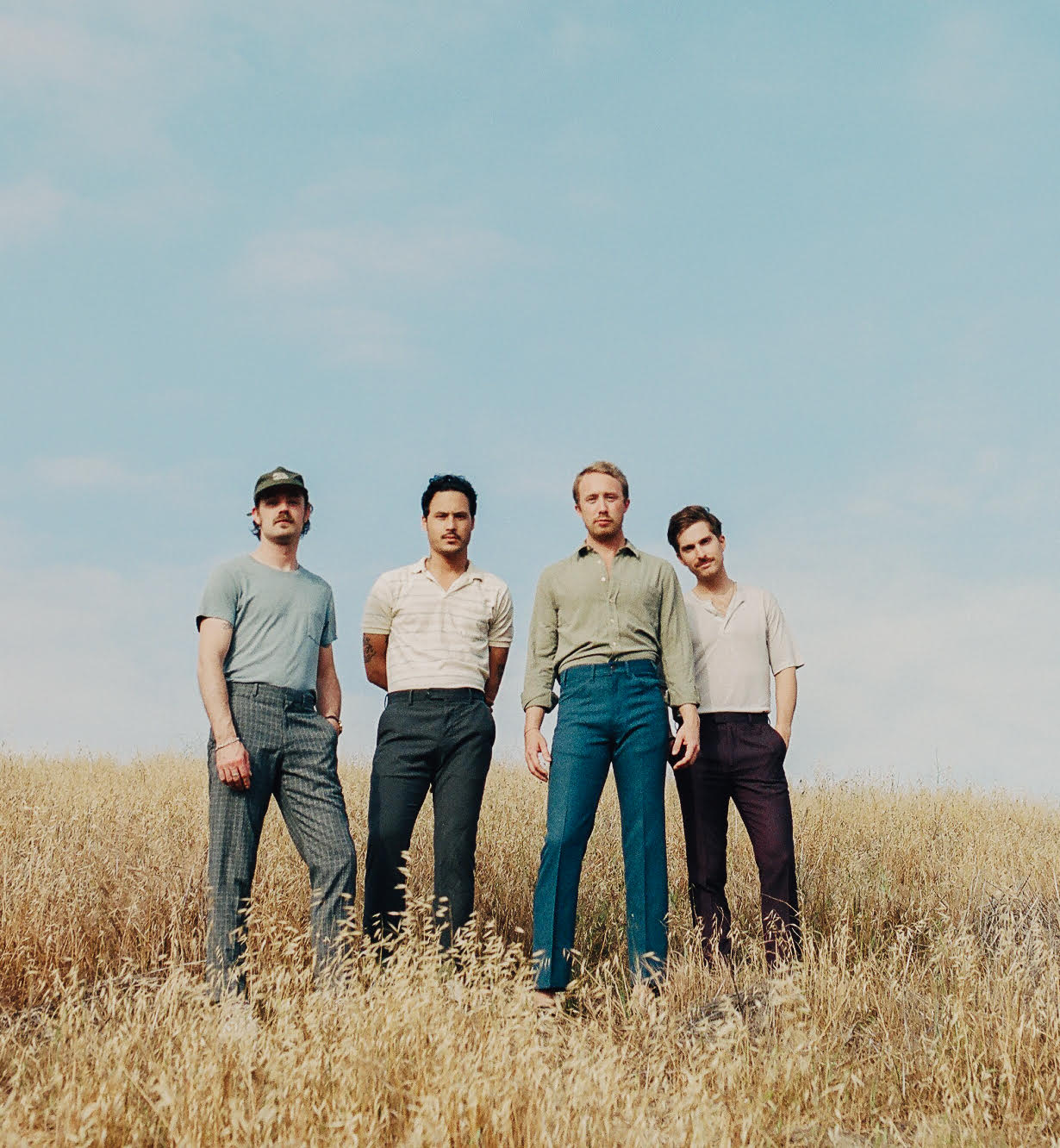 We had the chance to chat with Wilderado for our Artist Spotlight! This four-piece based out of Tulsa, Oklahoma has a sound that mashes traditional indie melodies with alt-country stylings for a sound that is so unique that it can only be theirs. Wilderado has been making waves on the alt-scene and will be playing weekend one of the Austin City Limits Music Festival this year and is currently on-tour in support of their EP Favors, which was released in May of this year. Check out our conversation below!

1. How did you come to pursue music and how long have you been at it?

"Well, I never aspired to it from a young age. I guess we got kind of had a musical family. In a sense, my mom was a classically trained singer. And so she kind of always had us around a piano, but I think maybe that tainted the idea of the more than anything for me, because I've never really done well at school or the idea of like, being forced to practice the piano lessons weren't ever my favorite thing. Only did that for a couple years. Honestly, my little sister is a singer songwriter and she started writing songs, and I started playing them with her kind at the end of high school. And so I when I went off to college, I, I started writing songs myself and it's very unromantic. That's, that's about it."

2. Could you walk us through your process of writing music?

"I think what we would like to do is not put much of a strain on it, however we come to the creative process is kind of welcome. I guess we lots of times and most of the times I guess I'll start an idea and see how flushed out I can get it and then when the band gets back together we we turn it into a Wilderado tune, I've been kind of doing a deal recently where I started an idea. And instead of going all the way through, I'll send it to the guys and see, see what they like, and are connecting to, before I and maybe get a little bit more input before flushing and all the way through. And then a lot of times, if we have time in our together and off the road will will start just by kind of creating a moment in our mood with theme or some sort of piece of music that we just kind of come up with together that that feels good between the four of us. And then I'll take that and try to put words and melody to it."

3. What artists have inspired you in your career?

"Yeah, I'm kind of an unashamed fan of Chris Martin. Which I guess feel guilty even, I have to give it a precursor like that. But I think just because the in the back half of Coldplay's catalog has been different than how it started. But I think their first three records really inspired me, I think really lyrically and just told me that he formed songs, and I'd be hard pressed to find somebody else that I kind of felt like, naturally, that's the way I do it, too.

And then also, Stephen Jenkins and Third Eye Blind is a huge influence on me, I think that I just think he's an icon of the same thing I but, you know, real early on their first two records, or were just massively inspirational. Still, I still listen to him a lot, I think his version of rock and roll and pop music, the way that he put those two things together, was really good, getting angry, and putting it to a beautiful melody. And, and then also, I've always just loved the way that he hasn't, he never really saw much of it structure in his songwriting. He seemed to have something to say, and the way that he followed his train of thought, but but at the same time, he went back and forth between being very ambiguous and specific back and forth, back and forth between those two things has always been really cool to me and spoken to me, I think, between the two of those, that those would probably be one and two and the Kings of Leon later in life in college. I started listening to Kings of Leon a lot they're from Oklahoma as well. And I think, I think that Caleb Followill is just really cool Unknown 6:41 to say the least."

4. Do you have any favorite music gear (guitars, amps, effects pedals, keyboards, etc.) that you love to use? If so, what’s the story on them?

"Yeah, I mean, the strong answer is, yes, I lucked out in having a really great uncle who spent like a decade traveling and going to auctions and curating just a private collection of incredible vintage gear, he somehow is able to form relationships with the custom guys at Fender and Gibson. And so he has a lot of cool kind of, I guess, unpopular stuff that you don't see around too often. So he he's been an inspiration on me, as far as just opening up his closet, and he sold me a Matchless Chieftain (amplifier) that those guys were making back in the 90s before they put them into factories. And so I've got one of the third like, garage made 90s Matchless Chieftains. And that is kind of everything to me, I'm so in love with it. And kind of what we do a lot is we really enjoyed the natural breakup of a an amplifier. So you're kind of always looking to use gear that is transparent and pushes the sound of the amp actually today got in the mail is a Cieratone Clone Klon (effects pedal) that I have in a box in my living room that I am going to take out tonight. So hopefully I'll get to let you know how that is. But people rave about and I'm so pumped about that."

5. Can you describe the vibe at your live shows? Also, what do you enjoy most about a venue when you do a show?

"I think the cool thing about venues is just incredibly a static kind of like in every sense of the word from their eyes to your feet to your ears, like they they all just have their certain, just the vibe of it. I'm I'm a big believer in the fact that like rooms holding contain energy and what what happens there kind of stays there you know what I mean? So it's it's always like a cool thing to walk into a room and just totally open to like 'what is this room about?' you know what I mean there's I think that may be my favorite thing, like what the vibe of a room is that you almost can't collect with the with your physical senses.

And then also for some reason I'm a huge fan of floors, just the the style and the in the color and the end the bounce or the lack of bounce of a floor so I always like to go out into the room and kind of walk around and see what it feels like. I just think that and then obviously the sound the thing that's always interesting about states in different rooms for me as we don't use any ears (earpieces), so it's it's always it's like hearing your songs from the first time every night just because it's it's just shockingly different everywhere that you go so it's fun for me to try and not be too precious about that and just kind of let the room or the stage sound how it sounds which makes it fun because it always makes you have different appreciation for the people that you work with there."

6. What is one thing that you want the public to know about your music?

"That's a good question. I like that. I sometimes I would say it changes which really shatters the whole response. But I think right now is just to know that it's thought out and we care about what we're saying, you know, there's just I think sometimes it's, it's easy to put an assumption on a band based off of what are your ears are telling you. I think that's that, that can be some fun. And I honestly hope to write that way where you maybe learn something for yourself, other than what I'm saying to you. But I always just want everyone to know that it's serious to me is not a joke. And it's not just words or notes filling in the between the beginning and an the end."

7. Do you have any upcoming projects you would like fans to know about?

(Austin City Limits) is sitting very high in our in our kind of look out on the near future. Just because, you know, two of us are from Texas, and two of us are from Oklahoma, three of us went to school in Texas and have gone to ACL multiple times, one of us has worked festival multiple times. It's, it's kind of like, our region's idea of like, the raddest thing you could do, I guess, as far as a platform and the experience so it's a pretty cool thing man. We're all pretty honored to do it, to say the least. And I just I'm excited it's that I think that that festivals is just so well done curated and Austin such a great city. I don't know it just seems like the people there and the town itself really does

Yeah. So we'll be out all October November with band called Sure Sure. And then all this is is heavily on our socials and then really Friday for kind of a little bit of a Frankenstein trip some couple festivals and then we hop on with a band we really love called Rainbow Kitten Surprise yeah and we'll we'll be doing I think eight shows with them. Which will be a really, really good for us because they have an incredible market. We played three shows with them last year. And we're all very blown away by how cool their fan base is and it's exponentially grown in the last year. That's going to be really great just for our band and for our experience. but also those guys are awesome if I can really down Earth really good, really good musicians. And it's just a really fun band to watch and learn from. So if you have a chance to catch that show, I think that's gonna be a really cool."

We really appreciate Wilderado taking the time to chat and make sure you check out their music. You won't be disappointed and if you get a chance to catch them live, do it!